Started to play some Heroes of the Storm again since I have an online friend group that plays it too. Also started playing it solo some and it’s pretty fun and feels good to be playing a MOBA where I don’t have to worry about last hits or items (although I instinctively keep pressing Y at the start of the game to open up the shop lol. League of Legends habits as I’m still playing that game too)

Been playing mostly Nazeebo since he gets really strong at level 20 if he has killed enough minions throughout the game (about 175 of them, which is possible to consistently hit as long as you don’t die too much and focus on stacking most of the time). His spider build is quite strong right now whereas in the past his frog build has been the primary one: I definitely prefer the gameplay of the spider build.

I initially thought HotS was dying or dead, but it turns out that may not be the case. Queue times are very short. People wrote some about that in this thread from 6 months ago: https://www.reddit.com/r/heroesofthestorm/comments/lnvpt6/how_dead_is_hots/

The eSports scene is apparently seeing a resurgence from the community. It sucks that Blizzard abandoned eSports support for the game but at least they are supporting it with updates (although they seem late on the latest hero release compared to the most recent two releases). Overall I’m not too sad if the eSports scene is not thriving since the game is still fun to play and I’m basically a casual player.

If anyone wants to try playing HotS, let me know and we’ll get some games in! DM me if you want to add me on Battle.net. It’s a very beginner friendly MOBA out there and a great entry into the genre for anyone who’s interested in MOBAs. I also think the fact that it has a lot of early fights and the map objective mechanic makes it good for people to learn how to use their abilities in fights and focus targets while keeping themselves positioned well to survive for a long time. The fact that there are many different maps can make it difficult to new players though and this is one area HotS is more complex/diverse than most other MOBAs.

I don’t like how much of HotS (and many other games, including other mobas and team shooters like overwatch) is trying to coordinate with other players who do the wrong things. Or getting a consistent full team to play, of people you like, who all want to play a similar amount and have compatible schedules, is a huge barrier to entry.

You end up doing a lot of lowest common denominator strategies and having to follow the meta instead of thinking for yourself.

I don’t like how much of HotS (and many other games, including other mobas and team shooters like overwatch) is trying to coordinate with other players who do the wrong things. Or getting a consistent full team to play, of people you like, who all want to play a similar amount and have compatible schedules, is a huge barrier to entry.

You end up doing a lot of lowest common denominator strategies and having to follow the meta instead of thinking for yourself.

I mostly agree with this. I’ve been playing HotS quick matches recently with 4 randoms and I’m not taking it too seriously, but there’s still a lot of pressure from people to conform and follow their plan rather than experiment or try to get ahead in alternative ways e.g. split pushing.

With League of Legends I take it more seriously and have been looking for a team to practice with for the last year or so, and have gone through 15+ teams without really finding one that’s serious about regular practice and improvement yet. There it’s not too hard to find people to play with but not a lot of people want to improve if it means doing things like replay analysis or discussing strategy vs. just playing a lot of games.

I’m currently playing tkok (Warcraft 3 map I helped with) and controlling 3 heroes myself. http://tkokrpg.com/ has some info though I’m currently still playing the last version I worked on without reforged.

Interestingly enough, a lot of these tips apply 1:1 to learning MOBAs too (Like DotA 2 or League of Legends), and why people don’t improve at them.

New World Open Beta is pretty fun so far. I’ve pre-ordered the game even though I’m aware there may be some p2w issues. I stopped playing the Open Beta since all progress will be wiped and it does seem grindy even though it’s fun. Will grind when it comes out for real and progress is permanent.

Tried out the Icarus Open Beta too this weekend and it’s pretty fun so far. Interesting take on the survival genre, standard in many ways. I played the alpha a while ago and it was a very different experience, like a looter shooter where you find guns in houses, whereas this time I didn’t even get access to a gun. Wondering if I played a different game’s alpha and confused it with this one…

Only got to play it solo and it seems like it will be much more fun co-op with other people. Also fairly grindy as a game in terms of the skill tree and I couldn’t find online whether progress carries over to the final release. Both New World and Icarus come out around end of September.

I confused the two because of the similar capsule art on Steam. 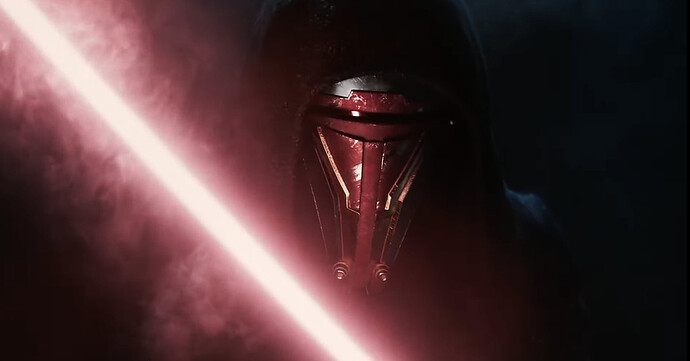 Star Wars: Knights of the Old Republic is getting a remake for the PS5

Return to the Old Republic

Heh Justin, came across this meme on Reddit and thought it relevant: 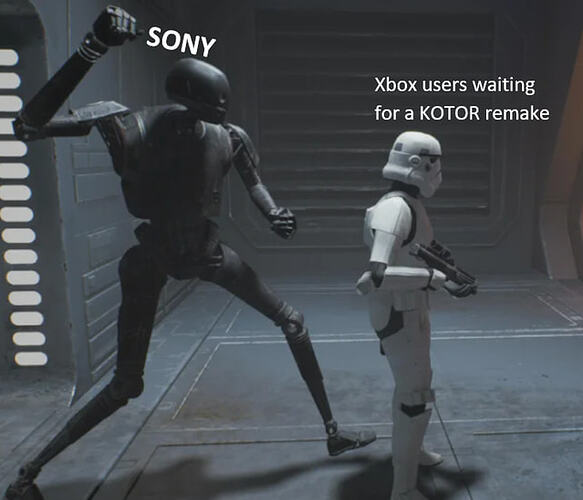 Wouldn’t have known what KOTOR meant if not for your post here. I finally finished Zelda: BotW (was being kinda completionist for a while but lately I’d been trailing off in amount of playing so I just decided to wrap it up and beat Ganon already even though I hadn’t done all the things yet). Fun game. Found last boss sequence pretty easy though I was pretty geared up. I bought it like a year ago though I didn’t start playing it much for quite a while.