I am going to analyse the following two paragraphs from Atlas Shrugged Chapter 1 with grammar trees:

The light was ebbing, and Eddie Willers could not distinguish the bum’s face. The bum had said it simply, without expression. But from the sunset far at the end of the street, yellow glints caught his eyes, and the eyes looked straight at Eddie Willers, mocking and still—as if the question had been addressed to the causeless uneasiness within him.

I want to get better at making grammar trees so I can explain how I’m interpreting sentences better.

Grammar trees can help with understanding material including confusing sentences, as explained here:

Do you want unbounded criticism? (A criticism is a reason that an idea decisively fails at a goal. Criticism can be about anything relevant to goal success, including methods, meta, context or tangents. If you think a line of discussion isn’t worth focusing attention on, that is a disagreement with the person who posted it, which can be discussed.)

The first sentence is: 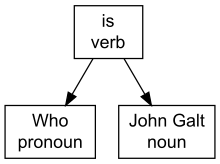 The second sentence is:

The light was ebbing, and Eddie Willers could not distinguish the bum’s face. 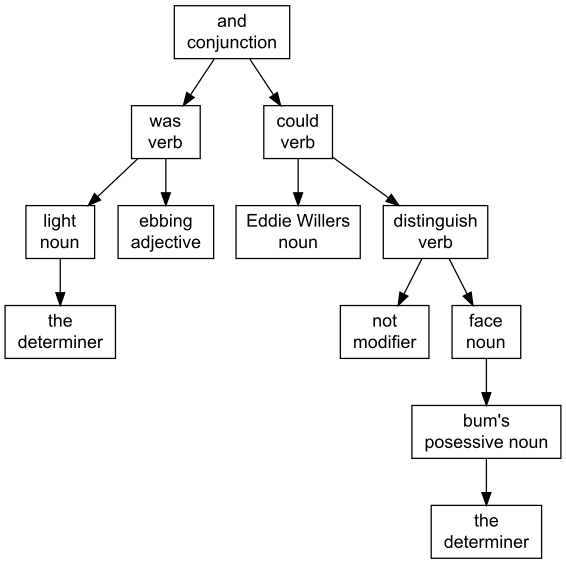 You have “ebbing” as an adjective but I think it should be a noun since it’s a gerund.

Structurally, I had a v similar tree to yours, with one exception: I had ‘not’ modifying ‘could’ rather than ‘distinguish’. I think this makes more sense b/c we could treat “could not” as one idea (i.e., the contraction “couldn’t”). I also can’t come up with a sentence where “not distinguish” is the main verb-phrase – when I try I need to add an aux verb for the sentence to make sense. Examples: “Max did not distinguish A from B”, “Max will not distinguish X”, etc.

I also can’t come up with a sentence where “not distinguish” is the main verb-phrase – when I try I need to add an aux verb for the sentence to make sense.

In general it seems like ‘not’ only modifies aux verbs and “be” – can anyone think of a counter example?
The first definition in caimbridge and oxford (via google) is about modifying aux verbs or “be”. The “be” case feels like a special case (e.g., “is not”), but you could also see “not” as modifying the object (as in “Max is not a spider”).

Cambridge also has this definition: “used after verbs like “be afraid”, “hope”, “suspect”, etc. in short, negative replies”.

Sometimes I’d treat “could distinguish” as one node for simplicity.

Some people might treat “could not distinguish” as one node but I don’t like that. I think the clear, non-verb modifier “not” should be separated.

If you split them, some grammarians would put “could” as an auxiliary verb child of “distinguish”. I object to that on fairly technical grounds, although I grant it’s reasonably understandable.

I would split them with the finite verb (could) as the parent. “Distinguish” is a bare infinitive serving as the noun object of “could” so I wouldn’t label it a “verb”. I’d give it a label which distinguishes it from a finite verb. That could be “noun” or for more clarity e.g. “verbal noun”, “infinitive noun” or two colors (in some videos I use a colored dot after a word for a second color). I think “distinguish” is more noun-like than verb-like here.

“Ebbing” is another non-finite verb. It looks a lot like a noun/gerund like Max says. You can think of sentences like “He understood the cause of the ebbing.” where it’s clearly a noun.

But you can also think of sentences where it’s a modifier like “The ebbing water was cold.” I think that’s like “toy soldier”, “metal toy”, “history teacher”, “race horse”, “boat race”, etc. See e.g. Noun as Adjective | Grammar | EnglishClub and Nouns as adjectives | Britannica Dictionary which names them “attributive nouns”.

(a) they cannot be used predicatively (“the time was turnaround” is impossible),

“The tide was ebbing.” is fine. Maybe that’s because it can be a regular noun in addition to being an attributive noun, and in this sentence it’s acting as a regular noun?

But note that “ebbing” isn’t plural yet no article is needed. Compare to “The object was a toy.” where “toy” requires an article when acting as a regular noun. (Remember from “toy soldier” that “toy” can be an attributive noun or at least serve as some sort of modifier.)

I think the article issue may be irrelevant. It’s a conceptual gerund, like “running”, which refers to the concept of running. Concepts like “chemistry” don’t need articles either. “The subject was chemistry” or “Chemistry was fun” both work (they also work with running instead of chemistry). I think the issue here is just that it’s not a count noun.

(b) they cannot be premodified by very (“a very turnaround time” is impossible),

(c) they do not take comparative or superlative forms (“turnarounder time” and “the most turnaround time” are impossible),

I think “the more ebbing tide” would be OK if you were comparing two tides. Or “my most ebbing emotion is jealousy” seems OK. They’re awkward though.

So one test for being an attributive noun clearly passes, one clearly fails, and the other two might fail but only with awkward examples. I don’t know how good those tests actually are. You definitely can’t say “most running” or “highly running” so maybe “ebbing” is different somehow. A synonym for “ebbing” is “receding” and you can say “highly receding” or “most receding” (I think; again, seems awkward); I think it’s just that some actions come in degrees and some don’t.

Knowing the term “attributive noun”, it’s easy to look up more info like Attributive Noun Definition and Examples and What are Attributive Nouns in the Dictionary? | Merriam-Webster. “FAX TRANSMISSION NETWORK ACCESS COST OPTIMIZATION PROPOSAL” is a neat example. And one of those pages gave more terms that could be searched: “noun premodifier”, “noun adjunct”, and “converted adjective”, but I’ll stop here.

I agree that the “not” modifies the could rather than the “distinguish”. I also agree that “ebbing” is a verb, not an adjective. A new version of the tree: 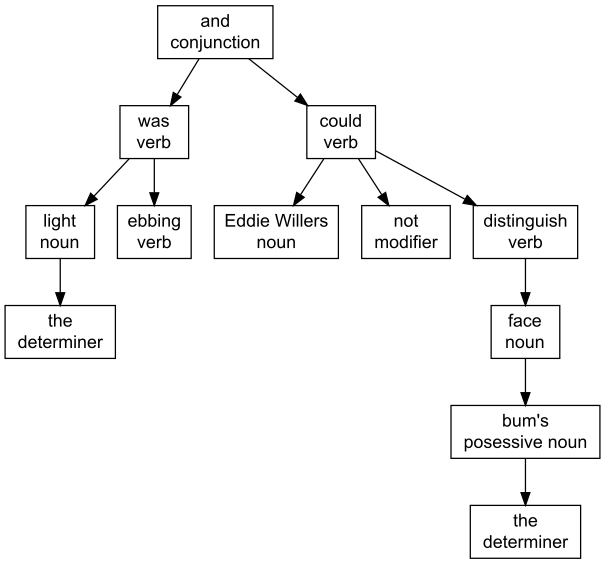 The third sentence is:

The bum had said it simply, without expression. 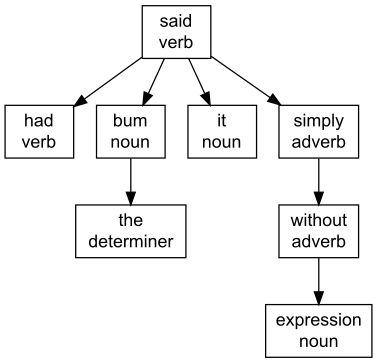 The fourth sentence is:

But from the sunset far at the end of the street, yellow glints caught his eyes, and the eyes looked straight at Eddie Willers, mocking and still—as if the question had been addressed to the causeless uneasiness within him.

Do you think you can reliably self-evaluate the correctness of your trees?

I have some knowledge of how to correct flaws in trees. I think I could use more practice in making trees. It wouldn’t make much sense for me to say I can reliably self-evaluate trees since I have posted trees in this thread that had flaws.

I think it’d be more effective to practice stuff where there’s less that you’re unsure about.