Topic Summary:
Some notes on Elliot’s grammar article. Can be found here.

Measures for success:
I don’t want to be too precise/demanding about this because I think it will lead to rebellion. For now:

So: The project is a success if I achieve the object-level goals before going back to uni (mid-sempter-ish). That might sound silly but avoiding rebellion is important.

A good response would:
elaborate on or criticise something I said.

Do you want unbounded criticism? (A criticism is a reason that an idea decisively fails at a goal. Criticism can be about anything relevant to goal success, including methods, meta, context or tangents. If you think a line of discussion isn’t worth focusing attention on, that is a disagreement with the person who posted it, which can be discussed.) Yes.

Grammar is about how to talk, listen, read, write and think.

There are many different and different types of language, so you can think about how each is adapted to communication and organising ideas.

English is a spoken and written language. There are forms of language like signing that I don’t know much about. There are art forms which arguably have a language, although that is more limited. Telling stories is a kind of language when you are being metaphorical. Literal elements of the story (people, objects, animals, locations, etc.) are used as symbols to represent (communicate) and organise ideas. Those literal elements don’t make much sense otherwise. Jordan Peterson talks about this. Here is where he talked about Sleeping Beauty. But stories typically depend a lot on other languages like English to deliver their message. That implies that languages can mix with each other.

Written language has a lot of modularity which makes it well-adapted to its purpose. You can organise ideas by grouping and separating them (into words, phrases, sentences, paragraphs, sections, etc.). Which is useful. For example, it means that you can prescribe what kinds of interactions are not possible between two instances of a group. Words in different sentences cannot interact in certain ways. Those prescriptions are good because they can stop your thinking from being too chaotic and making spurious or irrelevant connections.

Another example of how modularity is useful is that it can help you think about an idea’s ‘resolution’. An idea’s resolution, relative to a goal, is the number of sub-ideas that are relevant to express in order to achieve that goal. (This is not well-defined if there are multiple ways to achieve a goal based on different (and a different number) of sub-ideas.) For instance, I might think: This idea X should fit into a chapter. If I had no clue about what a chapter was, I wouldn’t know as much about what was relevant to accomplish with expressing idea X.

Putting your ideas into sentences helps you understand them better and think more clearly, even if you never share those sentences with other people.

Sentences are special because they have a lot of explicit rules. There are less rules about e.g. how to structure a paragraph, or a whole book for that matter.

English is simpler than people think. Once you know what the patterns are, you can understand most writing while using only a small set of grammar concepts.

I have heard people complain because there are a lot of exceptions to how bits of words are pronounced in English, like “-ough”. That is an issue about spoken English not being simple. I have heard people complain about other stuff but I didn’t understand/wasn’t interested in it well-enough to remember. Elliot could be saying that English is simpler than what those people think.

This article focuses on major concepts and makes English simple. It doesn’t cover some typical details like verb tenses or commas.

Sounds good. I trust Elliot’s judgment about what the major concepts are.

Knowing how sentences work lets you be a better thinker and learner. People fluent in English intuitively know grammar. Usually their intuition works, but when something confuses them, then they get stuck. They don’t know how to consciously analyze sentences, step by step, to get unstuck.

This is my situation. It makes me feel weak and ineffectual that I can’t do conscious analysis. My default means of progress has been: Pay attention to how authors-I’d-expect-to-know-grammar write, and look for things they do that are different from what I’ve been doing. Then I might skim a webpage to see if it talks about the difference. Then I might make a small update.

But I don’t have a coherent system for understanding. I don’t have a robust framework, built from fundamentals, within which to explain things. That limits my progress. See my points earlier “Grammar is useful because […]”

Analysis is also easier to communicate to other people than intuition is. Clear, precise, conscious understanding, in words, gives you a powerful tool for thinking (in addition to intuition, which is also valuable).

People see grammar analysis as snotty, useless, ivory tower, and weird. People are content with a lot of ambiguity about grammar if resolving it wouldn’t change a general social dynamic. I am not satisfied with this.

Talking came first. Grammar rules (and writing) were developed based on how people talk. So grammar has many exceptions.

Why does developing grammar based on how people talk mean that the rules you develop will have many exceptions? People don’t learn to talk in a very systematic way. It is very free-form and intuitive. It is loose, and it would be hard to try to box it in with a clear set of grammar rules. Also, there are a lot of differences in how different groups of people talk. Putting those ways of talking together into an acceptable common standard is hard too. It would be a bit mix and match.

English has a bunch of special cases that don’t fit the rules nicely. So remember that there are exceptions to most of what I say about grammar. But the main concepts of grammar are usually correct and still really useful.

OK. I will be able to recognise and study the exceptions if I understand the main rules.

Because grammar imperfectly describes how people talk, experts disagree with each other about some grammar rules. Sometimes I’ll teach something different than what your teacher (or a book) said. I’ve looked at many different viewpoints and, using my philosophical expertise, made judgment calls about the most useful way to think about grammar.

I trust Elliot’s process. I don’t think that it is that important for me to study the experts’ disagreements right now.

OK, so it seems like each part will build upon the next.

The first couple of sentences:

There are only two types of simple sentences in English. And they’re similar enough to share the same analysis steps.

I am beginning to understand what Elliot means by English being simple. Now we are going into step 1 which is about verbs.

The verb is the most important part of a simple sentence because it tells us what’s happening in the sentence. There are two types: action verbs and linking verbs. The verb determines which of the two sentence types you’re dealing with (action sentence or linking sentence).

I remember being told (e.g. at school) that a verb is a doing word. But that sounds specifically like an action verb. Maybe the teachers/curriculum-writers thought that I (or a sufficiently unmanageable number of classmates) wouldn’t be able to understand the difference between action verbs and linking verbs. Which could mean a lack of confidence on their part about explaining the distinction. Maybe I am remembering incorrectly.

Linking verbs link or relate two things. They describe or rename the first thing with the second thing. They’re sort of similar to an equals sign. The most common linking verb is “be”. (“Is” is present tense of “be” and “was” is past tense.)

Linking verbs:
Renaming one thing with another thing would be like:

So I think those are linking verbs.

That makes me think of a close kind of verb like in:

and I wonder if those examples are linking verbs. You are not exactly renaming X in terms of Y, because you could have a sentence like ‘X denotes Y and X is not Y because X is the map and Y is the territory’; and if you were renaming then that sentence (which is reasonable) would imply that X could both be renamed and not be renamed in terms of Y.

Ok, I skipped forward a bit and found out about complements. So action verbs complete thoughts, like ‘X acts’ is a complete thought, whereas linking verbs don’t, like ‘X equals’ is not a complete thought. That would resolve things: a linking verb lays the stage for a property of X, but requires a Y to assign the property, whereas action verbs can prescribe properties of X on their own. Please may somebody correct me if this is incorrect. Also it may be that this is the rule except for a list of exceptions.

Consolidation:
There are two types of simple sentences: action sentences and linking sentences. These are distinguished based on whether the sentence’s verb is an action verb or a linking verb. The two types of sentences are similar enough to share the same analysis steps.

The first step for analyzing a sentence is finding the verb. The verbs in the examples are “threw” and “is”.

An action verb answers the question, “What action happens?”. A linking verb answers “What type of linking is this?”.

Tip: If you’re not sure if a verb is action or linking, don’t get stuck worrying about it. It doesn’t make a big difference.

I don’t think I got stuck worrying about it, although I did want to think about it a bit more. I am happy with my understanding until being corrected.

Linking verbs besides “be” are uncommon. Now that you know the terminology, if you want details, you can do a web search, e.g. “list of linking verbs”. 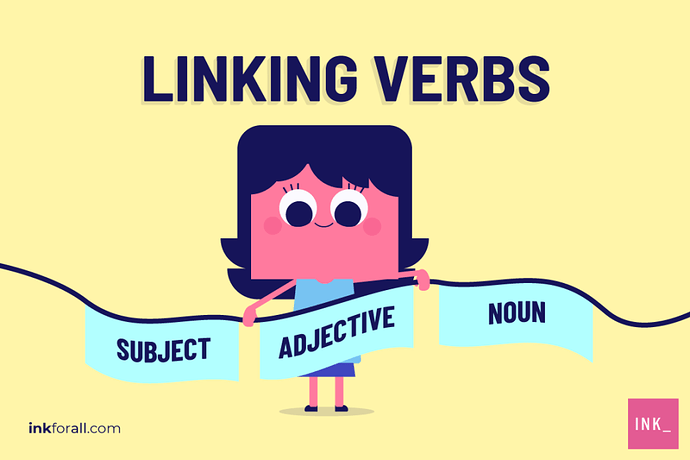 Linking Verbs: Complete List and How to Identify Them – INK Blog

Instead of showing action like other verbs, linking verbs connect a subject to the rest of the sentence. Find a quick linking verb pdf with examples here.

This article talks about many of the linking verbs, while referring to them in their infinitive form, as shown below. It seems likes it would be better to just refer to the linking verbs in their finite form. Is there some good reason for talking about the verbs in this way?

There are several verbs that are always linking. These are: 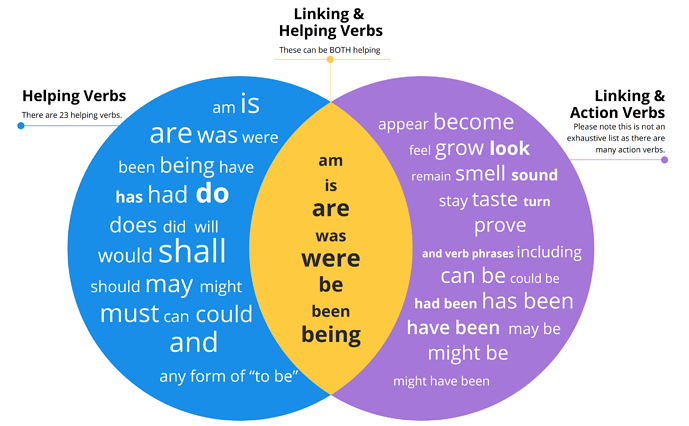