i just realized something that’s bugging me about Discourse. in Latest, you can’t tell who wrote the most recent post in a topic. this makes it a lot harder to find new stuff i haven’t read.

The ordering of the multiple ppl who have posted in the topic is not based in a consistent way on who posted most recently. Neither the left nor right icon is always the latest poster.

Top, My Posts and Read have the same problem.

It’s different in Categories. There, it shows only one person’s icon per topic, and that person appears to be the most recent poster: 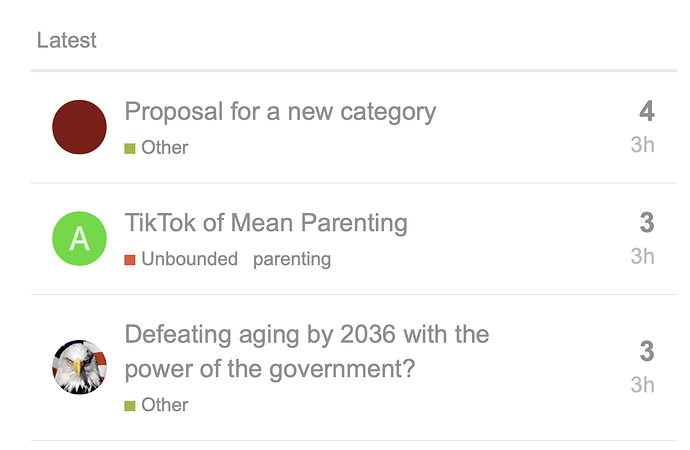 I notice that in each topic there’s a thing that shows latest poster.

If someone were interested, mb they could create a small plugin to add “last reply” to thread-listings.

I guess that such a plugin wouldn’t need to touch much. From the looks, just UI/view code. The info is already on the page via a tooltip (tho that’s pretty useless)

The first page you load seems to have all that info baked into the html, but subsequent pages seem to load via ajax – and the payload already has the right data.

Unbounded - Critical Falliblism requested https://discuss.criticalfallibilism.com/c/unbounded/9/l/latest.json?ascending=false which has the following json with the required info. (note: i got the red arrows wrong; ignore those) 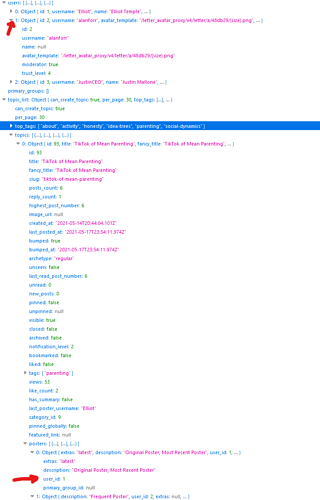 I figured it out.

First of all, you can hover people’s icons next to a topic and it’ll show a tooltip with info like most recent poster, frequent poster, and/or topic starter.

The blue circle is associated with the css class latest, but it looks like it’s only shown when the latest poster is the first avatar (and there’s more than one avatar). That sounds like a bug to me but idk. I originally thought it mb had something to do with whether the post had been read or not, but it doesn’t look like that’s it, either.

edit: it’s probably easy to create a greasemonkey / tampermonkey script to add a CSS definition for latest that doesn’t depend on the avatar being first in the list. IDK if there are better ways to add custom CSS to a site, but anything that does that could make blue circles be consistently shown for most recent poster.

not a bug. the blue circle is only necessary for disambiguation in the case it’s used in.