There seems to be broad agreement that something significant is currently going wrong with health in the modern world. It seems related to food, obesity, diabetes, heart attacks and more. It affects so

There seems to be broad agreement that something significant is currently going wrong with health in the modern world.

I don’t agree that something significant is currently going wrong with health in the modern world. Why do you believe this?

It was me. Not sure why I was anon tbh

Here’s more context to make this a better question (sorry).

I know that ET is familiar with all these objections to mainstream complaints about health crises. I would guess that in the past ET has made some, if not all, of the above objections himself. So I assumed that ET had something totally different than the usual answers in mind.

Obesity and obesity-related diseases, which is really just people choosing to over-eat

That is one theory which I did mention briefly. But here’s another one:

I don’t know what happened with this information from 1993. It didn’t become widespread. Was it ignored, suppressed, not given funding for followups, or refuted somewhere? It looks potentially important and hard to explain while defending vegetable oil. (re suppression: I understand that big companies are able to suppress things like being exposed for selling fraudulent olive oil. Some investigators have done things like publish the brand names that were legit, and then omit the names of the fraudulent ones, due to pressure.)

And it’s not the only study with results like this. From the paper:

Such an observation has been made previously in genetically obese ob/ob mice (Cunnane et al. 1986) in which increasing the (n-3) fat content of the diet without change in the macronutrient content decreased weight gain despite higher intake.

Heart rate, which has been used as an index of metabolic rate, is also correlated with the percentage of long-chain polyunsaturated 22:6(n-3) fatty acid in cardiac phospholipid (Gudbjarnason et al. 1978).

I looked up the actual paper because it involved them testing this stuff in humans in 1983! It begins:

They found that the supplements made a difference.

Even if obesity is just overeating, there are some other issues you didn’t mention on your list like diabetes, heart attack, cancer, stroke and increases in various chronic illnesses. I wasn’t intending to bring up drugs or “mental illness” stuff (though I do think some of the research connecting diet to “depression” or “anxiety” is plausible). Heart attack, etc., look like legitimate health issues. There are some possible explanations for what’s going on there which don’t blame diet, such as that we’re living longer and doing better record keeping, but I’m not convinced that’s the whole story. You could also say these issues are caused by obesity which is caused by overeating, but again I’m not convinced that’s the full explanation. And is e.g. childhood obesity in kids aged 2- 5 from overeating? That would require extra explanation, whereas processed-food-based explanations like vegetable oil cover kids without added difficulty.

Vegetable oil is a major, recent diet change, and there is a good explanation (involving omega 6 fats being less stable) for how it could cause many illnesses. For obesity, there’s also the research above connecting vegetable oil to obesity, given equal calories eaten, but I don’t know the explanation for that.

People doing better on a bunch of different diet changes which reduce processed foods is difficult to fully explain with non-dietary issues. There are some candidate explanations for that, such as that limiting the foods you eat, and especially limiting convenient foods, makes it harder to eat as much food or snack, therefore lowering obesity. Or that people eat by habit/autopilot a lot and if you take away some of their eating habits they don’t (fully) replace them. But I’m not convinced that explanations like that are the full picture, and even if they are factors they don’t give us any particular reason to exclude or reject the idea that some non-quantity aspects of diet matter too.

And I don’t know any important criticism of diet mattering, any reason to try to avoid that position.

I don’t know anything about free radicals so I have no comment about that part of it.

Regarding the weight gain stuff, my assumption up until now had been that resting metabolic rate is basically constant, which contradicts studies like that rat study. Thinking about it more, I’m realizing that I don’t understand it very well: I don’t really understand what optimization problem evolution was trying to solve by making the resting metabolic rate whatever it is.

I don’t know what happened with this information from 1993.

The result has replicated.

So what I think happened is: some scientists knew stuff but the public was misled by health experts anyway. And that’s still going on. Some scientists are still trying to get the word out without yet succeeding. The information wasn’t wrong or refuted.

I don’t really understand what optimization problem evolution was trying to solve by making the resting metabolic rate whatever it is.

I don’t know in detail.

One problem evolution was trying to address was food scarcity, ranging from short term (e.g. failing to hunt or gather today, perhaps due to short term injury) to longer term (less food in winter, less food for a few years due to weather or a disease killing off some plants or animals or, but i doubt evolution specifically designed for dealing with longer term problems like a 10+ year famine). Another problem evolution deals with is variability in amount of physical exertion.

One potential reason that omega 6 fats (in higher concentrations) would cause weight gain is that your body is evolved to recognize those fats as a low quality food source that you’d only eat much if food was scarce, so it turns on some mechanisms for coping with food shortages like saving more energy. (why not save more energy all the time? presumably there’s a tradeoff involved with some downsides. maybe some energy saving options increase some sorts of damage to some of your cells.)

fight or flight responses might boost metabolism – conserving calories is a minor concern in dangerous situations. being scared for your life for a long time period might be a way to lose weight without exercising (given equal calories eaten).

Also the issue isn’t just metabolic rate (using energy up). It’s also digestion and extracting calories and other things from food (acquiring energy). How well we do that can be affected by lots of factors including what bacteria we have in our gut and whether the food is blended before eaten. Extracting part of a food, e.g. juicing, also affects digestion even if all your juice left out was fiber. There could also be bottlenecks like we can only digest something at a specific rate and if we eat too much of that food then more gets wasted (moves on to the next part of the digestion system before the current part does the most it can).

Your ideas for reasons why the metabolic rate could change sound plausible.

I thought about the acquiring energy part, but I didn’t bring it up for the following reason. The calories of a food item are ideally supposed to be measuring how much energy a healthy digestive system will extract from that food. If different amounts of energy are extracted from food with the same number of “calories,” then that’s just a problem with how food calories are determined. I assumed that the rat experiment did not have this problem.

The way they measure calories is old and bad. They basically looked at heat energy from burning fat, carbs, protein and alcohol, which is quite different than digestion. They have some improved method to better take into account how our digestion, e.g. works by subtracting based on heat generated by burning fiber, since we don’t extract calories from fiber. They still aren’t very good and I read something saying basically US calorie labels are not required to use the new methods and usually don’t. They also get their choice of multiple methods so companies could use whichever ones gives the lowest calories when they care enough to pay for extra work.

How is the caloric value of food determined?

A very good question to tackle because many people do not have a good understanding of calories. First of all, a calorie is not a thing and therefore cannot be full or empty. You cannot put calories in a bottle. A calorie is a unit of measure of...

There’s been some research showing some calorie numbers are inaccurate. It’s not great research either – it looks at what made it undigested into urine and stool or not. 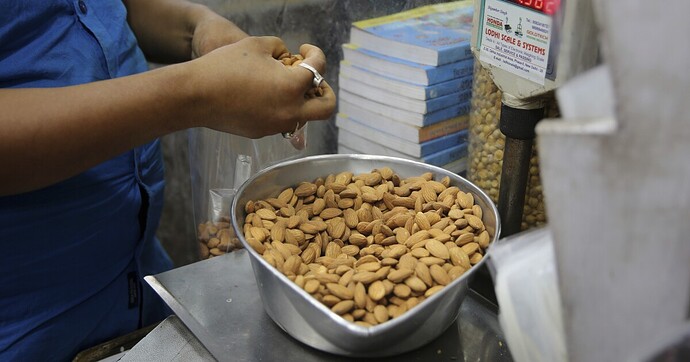 Calorie counts on food labels seem like an immutable guide to help you track what you eat. But the numbers on nutrition labels may be imprecise.

A few years later, in 2016, Baer and colleagues looked at the effects of food processing. They found cooking and grinding helped break down cell walls in almonds, freeing more calories for digestion. Roasted almonds had slightly more digestible calories than raw almonds. When the nuts were ground up into almond butter, nearly all the calories were digested.

Ground up nuts are pooped out less.

These studies are being funded by industries that want to find that their foods are actually lower calorie than currently labelled.

Despite his findings, Baer said he thinks the calorie counts used for most other foods are fairly accurate. And even though the U.S. Food and Drug Administration lets companies use different methods to determine calorie counts, the agency says products aren’t supposed to have more than 20% more calories than what’s stated on labels.

ugh that the FDA is just like “don’t be wrong by more than 20% plz” and probably doesn’t rly even enforce that anyway.

They put calorie labels on food and restaurant menus but those aren’t very accurate and they know it. But they present it to people like it’s accurate. Some people then “count calories” using that information and believe they have really accurate calorie data for their diets.

BTW, BMI, GDP and inflation measures are also poor. In some cases, including BMI, the old, poor measure was never intended for its current use by its creator. Psychology research tends to be full of even worse measures for things.

I doubt inaccurate calorie counting explains much if any of the rat study, but if it were relevant it would mean vegetable oil calories are higher than labelled and believed (or other stuff is lower) which would be a problem.