Topic Summary: In this thread, I am going to go through various ~completed conversations and try to make discussion trees for them. I’m doing it publicly so that people can point out mistakes if they see any.

Goal: Get better at philosophy by learning discussion trees better.

Do you want unbounded criticism? (A criticism is a reason that an idea decisively fails at a goal. Criticism can be about anything relevant to goal success, including methods, meta, context or tangents. If you think a line of discussion isn’t worth focusing attention on, that is a disagreement with the person who posted it, which can be discussed.) Yes.

My tree differed more from Elliot’s tree than I thought it would.

I don’t really know how to articulate this, but the nodes in Elliot’s tree seem way more atomic, and serve clearer purposes. E.g. I liked how ET translated the “I was not aware opinions were not allowed here” comment into what it really meant, which is that it was answering the implicit question why are you contradicting me if you don’t believe in debate? with the non-sequitor because opinions are allowed here.

actually, uploading it as a png because it’s more convenient 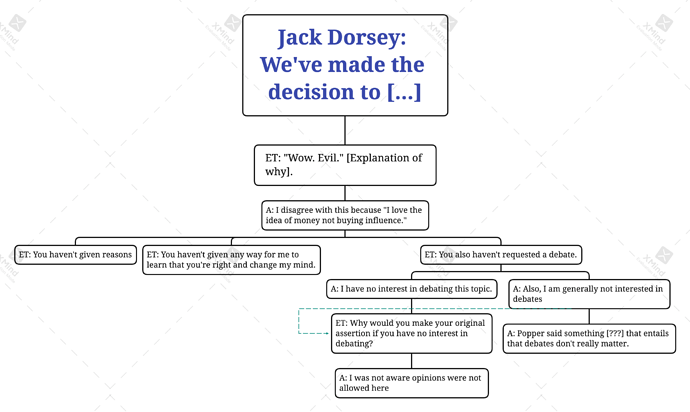 I tried another one too. There’s an amusing exchange between Elliot and A in the comments of this same blog post, so I made a tree for that, and tried to make it a little more like Elliot’s tree in the sense I described above.

I left a lot of stuff out of the tree. I decided to stop when I got to comment #14082 because there’s no natural place to put it in the tree, it ignores Elliot’s replies, and A is repeating stuff he said earlier.

In hindsight, there wasn’t much back and forth in this conversation so I’m not sure if it was the best example to practice on.

Here’s one for the discussion Alan and I had about quantization. It covers everything from the beginning all the way through until the line on this post, after which I start to ask Alan to give his own reason for why he thinks partially quantum mechanical theories are bad. I see that line as basically starting the conversation anew with my better understanding of what Alan means by partially/fully quantum mechanical theory, and if I was going to put it in the tree it would be a new tree.