Dr K And The Dangers of Twitch Therapy

Link to video: Dr K And The Dangers of Twitch Therapy - YouTube

Thanks for sharing this Elliot. I just started watching the video and wanted to jot some of my thoughts down when I saw this slide: 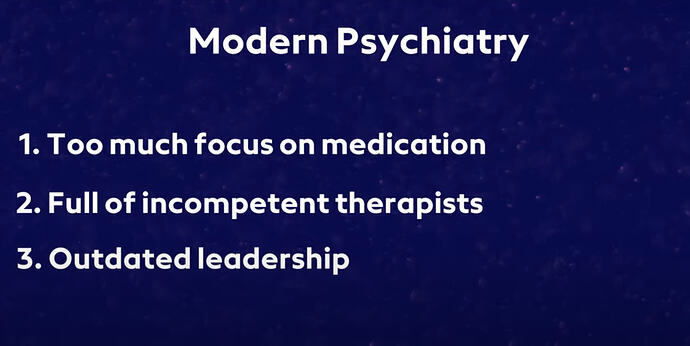 image1810×908 147 KB
It was scary to hear about Reckful being held against his will AND charged $900 a day for it (that kind of cost could literally bankrupt some people after less than a week, especially since they’re imprisoned and can’t even work, so I have no idea how that’s justifiable by the government)
As a side note, I wonder if the maker of this video has read any or heard of Szasz?

I clicked on the video because I’ve heard of Dr. K before and found some of his ideas interesting. I’ve always been interested in mental health, but I was skeptical of some of his approaches (like traditional Hindu religious stuff + philosophy integrated into his psychology). I was also skeptical of the idea of viewing gaming as an addiction and normalizing that view for the majority of people who show up on his channel.

Will comment more as I get further into the video.

Edit: Holy shit, Reckful said that he spoke with other people who said they had been there for a year. If they were charged full price per day, that would come to 900x365 = $328,500. Either the pricing was slashed down or they would be in massive amounts of debt, especially since they can’t possibly work while being detained in a mental institution… This is terrible and unjust.

Finished the video. What Dr. K was doing on stream seemed like therapy to me. At the very least it couldn’t be called just normal conversation with no mental health/long-term implications for the person on the receiving end who’s being very vulnerable, sharing a lot of repressed stuff, and being pushed into exploring certain topics by Dr. K’s questions and responses. Ultimately I don’t know whether Dr. K contributed to Reckful’s suicide or not but I think it’s definitely unethical and misleading for him to claim that these sessions aren’t therapy when they share so many properties with therapy. I don’t know what kind of disclaimers he puts up about the sessions having the potential to be very impactful both to recipients and viewers, but it seems like he’s prioritizing social media growth and popularity over responsibility to his audience and the people who come on his show.