An anti-capitalist commented on the video. I discussed with him some, then he deleted all the comments (unfortunately deleting a YT comment deletes anything nested under it). Someone had most of it open in a browser tab and sent me a copy. (Click on the image to expand it and raise the quality.) 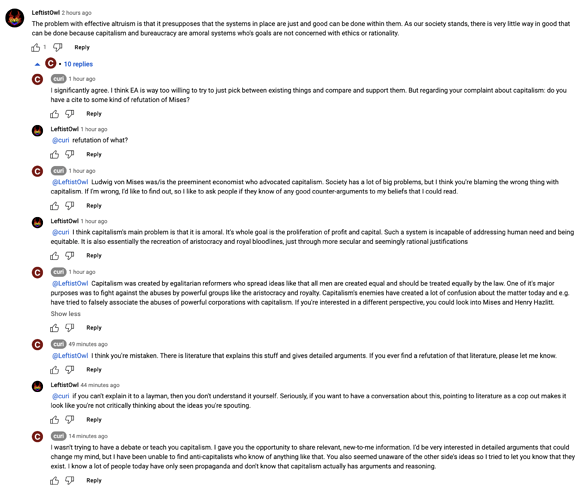 I also have everything the leftist said which YT emailed me notifications about so I’ll paste his other comments below. The first one goes between my two comments that YT displayed as consecutive. YT is often glitchy displaying comments.

just because it was built by supposed egalitarians (who were also probably racist and sexist) doesn’t mean the system itself is egalitarian in nature. The structure of capital and capitalism is meant to exploit the working class and enrich the owners of the means of production. It is inherently undemocratic, unfair and encourages abuses of power

yeah, sure, capitalism has reasons for existing, and some type of rationale, but I’m telling you that I disagree with that rationale. I think it’s an inherently unjust system that fundamentally creates an underclass for the wealthy to exploit. If you’re not willing to actually push back substantially, I guess we’re done here. I’m not going to read what Dumbfuck Mcgee wrote in 1866 to see the arguments for capitalism, I want you to provide what you think.

“Dumbfuck Mcgee” refers to Mises who did not write in 1866.

I recall saying something about him “disagreeing” with stuff he hadn’t read and wasn’t interested in reading. I may have mentioned that he couldn’t summarize capitalism in a way that one of it’s advocates would agree with, but I may have just thought it without writing it.

I linked him to Liberalism: Reason, Peace and Property · Elliot Temple because he kept asking for my words. He commented on it:

first contention. “So all trade is beneficial to everyone involved,” only works when people are on even playing ground and have equal needs to be met. If one person has so little money that they are regularly food insecure, they are put in a position to accept whatever deal they can and thus, if they strike a deal with someone of great wealth, that person of great wealth will have more bargaining power than the person in need of food.

Then he deleted everything before I replied. I think he realized he was losing and making anti-capitalism look bad (while I looked reasonable in the discussion). So instead of reconsidering his position, he just deleted evidence. I guess he also realized that his tactic of accusing me of being unable to explain the ideas myself was in fact wrong, and also he probably knew that his first reply to my article wasn’t actually going to win the debate for him.

Overall, I’ve found many people hostile to reading or discussing the arguments that some of our best thinkers already carefully wrote down. I think that’s interesting and really bad.