This is a thread for me to say small things. You can comment here, but if it’s going to be a big discussion please move to a new topic (use Reply as Linked Topic).

I’m happy with Discourse so far and glad I chose it. I just set up a Global Pin intro topic to explain to new visitors about buying an account. Discourse has done a good job of having features I need, especially the paid memberships. And it allows custom plugins, so Max was able to make a small plugin to fix the one issue where Discourse really let us down: automatically giving anonymous members permission to post. I like how Discourse handles anonymous accounts; it just ought to automatically put all the anonymous accounts into a user group so that admins can manage permissions on that group. But that’s fixed now.

I also like Ghost so far for https://criticalfallibilism.com but I’ve used it less and I’m less impressed with it than with Discourse. (EDIT: Not sure why that link is showing the raw URL instead of automatically turning into the page title.)

If you don’t communicate much with words, then what you look like could be a substantial percentage of what you communicate to someone. (Or if people don’t listen to and care about many of your words.)

MVL mentioned something I hadn’t thought about before. (his long speech starts at 2:26)

Anyway, I was used to having to keep going after a loss, and didn’t really think about how some sports have less of that due to elimination tournaments. In Smash Bros. Melee, double elimination tournaments are common, so you keep playing after your first loss and stop after the second. Some players often do well after the first loss and are known for playing well in the loser’s bracket, while other players don’t handle it as well and sometimes get demoralized lose again more easily after the first loss. Some people seem motivated by the loss and want another chance at beating people, while others get demotivated. 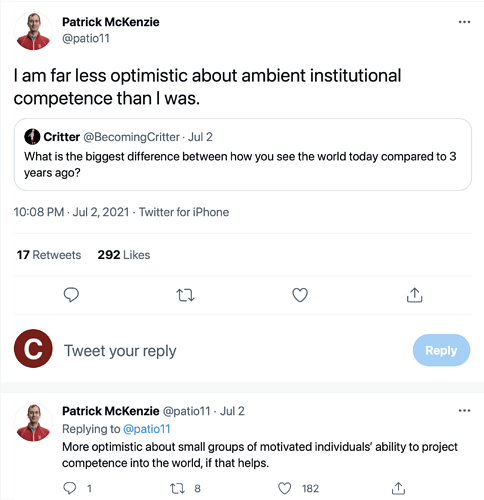 He lowered his opinion of the government, particularly because of it’s COVID response. That makes sense.

But it’s problematic. He’s helping prop up a bad government. Think about Atlas Shrugged and Dagny’s error. patio11 is contributing his brains to make the government and society seem more competent to other people. And he’s trying to have small groups of competent people lead large groups of incompetent people, like Dagny (and Eddie and a few others) trying to lead a railroad without enough brains working for it.

For more info about the issue, see the quote from the Atlas Shrugged introduction that I gave here.

But it’s problematic. He’s helping prop up a bad government. Think about Atlas Shrugged and Dagny’s error. patio11 is contributing his brains to make the government and society seem more competent to other people. And he’s trying to have small groups of competent people lead large groups of incompetent people, like Dagny (and Eddie and a few others) trying to lead a railroad without enough brains working for it.

Do you think he should have not done the vaccination-related work, or that it would have been okay to do it if he expressed some clear moral judgments/criticisms about the incompetence of the govt (as opposed to semi-hiding it behind phrases like “ambient institutional competence”), or something else?

Hard to say. It’s his life, his choices, his personal situation that I don’t know a lot about, etc. It’s problematic. He should read about the problems (e.g. read Atlas Shrugged) and think about them and make an informed judgment. I don’t think he’s done that, so that’s bad.

A secondary consequence of having a more educated opinion on the matter would be that his public discussions of the issues to 100k followers would be higher quality, more nuanced, more aware of downsides, etc.

I’m not saying everyone should shrug and withhold their brains from the world today, but I do think people should try to understand why that is worth considering, what it means, what the problems and situation are, etc.

DD/TCS was right that children are treated badly.

But DD/TCS was wrong about how unique that is. Said it’s this one special case, the “final prejudice”. No.

Men are treated badly in various ways. Check out some Men’s Rights Activism stuff. They have higher suicide rates, higher military enlistment rates, broadly do more dangerous jobs, go to prison more (and violence at prison remains very much not being fixed), and various other problems. And a lot of men get screwed regarding child custody, child support payments and alimony.

There’s a lot of anti-white racism now, as if more racism is the solution to some of the problems (both actual problems and confused propaganda) that other racial groups are having!?

And there was already plenty of discrimination against “white trash” and “rednecks” before wokeness and BLM.

There’s plenty of anti-Christian stuff now. Anti-semitism remains alive and well. No religious group (or atheists or agnostics) is just popular with everyone.

The world just sucks. That’s what’s going on here. DD/TCS noticed one part of that. Failed to notice the rest. Super biased.

Failed to notice the rest.

Isn’t mistreatment of children a very big problem though? TCS choosing to focus on children was for a reason right? Even in your analysis of biggest problems you concluded that destroying the rationality of people is the most important problem. 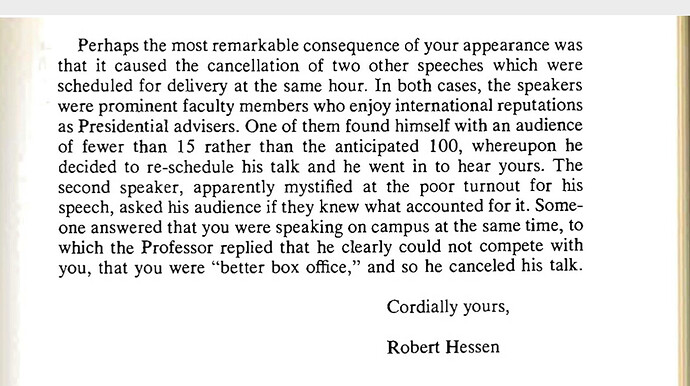 It says a lot about speakers if they cancel their speech when they see a small audience. I can’t imagine Ayn Rand cancelling a talk because only 15 people showed up to hear her. It sounds like the cancellers only care about social climbing, and consider speaking to be an effort they don’t like to make, which is only worth the trouble if enough people will be impressed. Whereas Ayn Rand actually had stuff she wanted to and liked to say. Asmongold, like many, has noticed that companies (and people) say woke stuff but they are using it as a shield and actually they’re shitty assholes. (Not that woke is very good either, but they aren’t really woke, they’re liars telling a convenient, trendy lie. And woke has some good points in it, (some of which aren’t original), which the liars do badly on.)

One of the most dangerous trends I’ve noticed in the last decade is the increasing tendency to believe that if someone disagrees with your political opinions, they’re not merely mistaken, but evil.

This fallacy has a subtly dangerous corollary: that someone who expresses the correct political opinions is therefore good. Lots of really bad people thrive in the shadow of that principle.

PG also clarified what he meant:

What I meant (obviously) was that people treat one’s political views as identical with one’s character, but it would have been pedantic to phrase it that way.