Venture Capitalist firms that fund scams (such as YCombinator funding the crypto scam Stablegains, twice, or the people who funded Theranos) should be realistically suable in court. My understanding is that they aren’t, and this is a corrupt privilege of the elites to let them participate in frauds, have financial upside when the frauds (temporarily) work, but escape liability.

Not a lawyer / not legal advice but: I think they can be sued but there is a high bar for actually winning anything more than the VCs invested. I don’t know anything specific about VCs, but in general to reach beyond the corporate veil of the investment you’d have to prove stuff like:

Those four points sound true re YC and Stablegains which was an obvious scam (their business model was to invest your money into a crypto ponzi scheme for you and keep like a quarter of the interest; their company name itself suggests a ponzi scheme). Nevertheless I don’t think YC will get in trouble. But I think they should get in serious trouble. I think people should revise their opinion of YC to be pretty low (if it was high; I’m sure there were many other bad past things that I didn’t pay attention to).

re the third point: if YC didn’t invest but some other VC did, then it’d be roughly the same harm. But if you compare YC investing to no one investing, then there’s way more harm. I’m not sure which comparison you intended but I don’t think “someone else might have funded this scam if we didn’t” should absolve them. I don’t think you should be able to go around funding scams and profiting when it works and get away with that. I think in this case YC is basically actually guiltier than the founders they funded and should (along with the other VCs) be seen as the primary culprits. I don’t think it’s plausible that they did this by accident. (What is plausible is that YC has a lot of people involved who disagree about stuff, and that some partners were opposed to this investment or not paying attention/involved, while others were in favor and primarily responsible. So assigning blame appropriately could be kinda hard/messy.)

Re Theranos, the four points could be true but the standard story is that the investors were grossly irresponsible/negligent/etc and, due to not doing reasonable due diligence, they didn’t know it was a scam (not only at the initial time of the investment, but also IMO relevantly later on before the scam went public). Again I think they should be in serious trouble. But they aren’t. New articles say even Elizabeth Holmes herself is likely to get off lightly whereas I think she should be serving a dozen life sentences without parole. She and Sunny were super guilty and clearly did a lot of fraud on purpose.

More broadly my understanding is that there’s a huge bias in our legal system in favor of white collar criminals and elites, against blue collar criminals, street thugs, etc. This is one aspect of the “privilege” that wokes, Occupy Wallstreet and others complain about (often with a poor understanding of what specifically the problems actually are, but people’s intuitions that there are some sort of significant problems are often reasonable).

I don’t particularly care about these individual cases and it can be problematic to suddenly change policies contrary to people’s expectations. What I care about is the societal problems and how the legal system is broken.

Another example of a YC-backed scam: 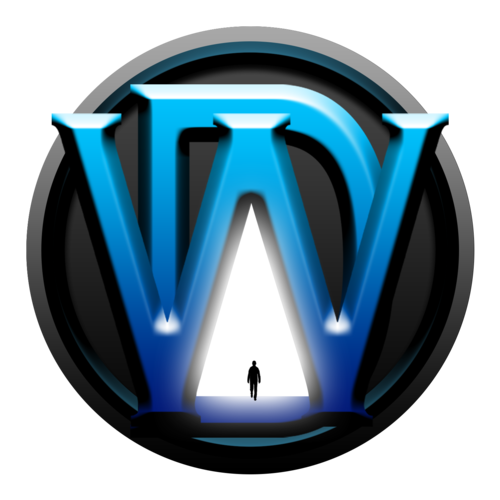 DreamWorld: The game where everyone creates together | Y Combinator

The game where everyone creates together. Founded in 2020 by Garrison Bellack and Zachary Kaplan, DreamWorld has 8 employees based in San Francisco, CA, USA. DreamWorld is hiring for 2 roles in design and engineering.

I see that YC funded 15 startups that show up in a “bitcoin” search:

A list of companies YC has funded across many verticals including hardware, edtech, biotech, healthcare, developer tools, consumer and enterprise, to name a few.

A list of companies YC has funded across many verticals including hardware, edtech, biotech, healthcare, developer tools, consumer and enterprise, to name a few.

There are 30 results for stable+coin 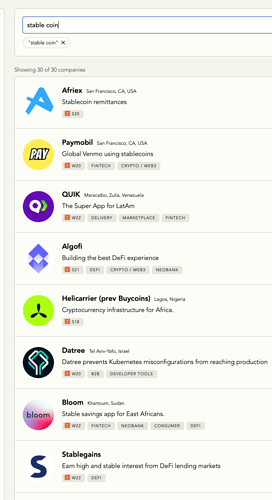 I think a lot of the results only match one search term, but some look nasty like the top two.

Their search is inconsistent. Here are 43 results for the same search!? 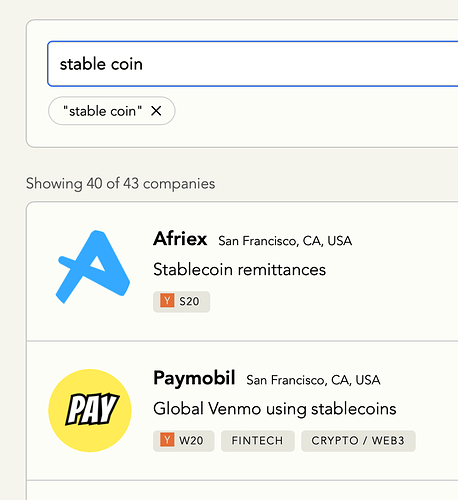 re the third point: if YC didn’t invest but some other VC did, then it’d be roughly the same harm. But if you compare YC investing to no one investing, then there’s way more harm. I’m not sure which comparison you intended but I don’t think “someone else might have funded this scam if we didn’t” should absolve them.

I agree with you regarding what should be, and I also think that’s the legal rule (but don’t know for sure).

I think this is true, but not mainly a result of the explicit rules that are or aren’t in place – though there’s certainly some of that too, like higher penalties for drugs popular on the street vs. essentially the same drugs that are popular with richer folks.

I think people who are equally guilty but can & will pay for great lawyers, both before and after they’re in legal jeopardy, do far better than people who can’t. I’d also guess that sometimes it’s not even about paying, just access. I can imagine being an especially bright lawyer with lots of choices for clients and preferring to work with white collar defendants rather than street thugs even if the latter could pay. Whereas it’s hard to imagine the reverse situation. So I think it’s possible the quality of legal help available to Holmes (or Epstein, etc.) might be unavailable to street thugs at any price.

I think the legal system is also much easier on people who understand it pretty well before a problem arises. I think a lot of white collar criminals have taken courses explaining the law that applies to their situation(s) to a far greater extent than street thugs. As a result the white collars are better at skirting the rules in ways that are ambiguous and harder to prove.

Also, I think white collar criminals tend to be older and closer to judges in age, economic status, life situation, race, etc. than street criminals. According to the explicit rules that stuff shouldn’t matter. But I think it does matter, maybe a lot, that judges (and, to a lesser extent, juries) tend to see white collars as more like themselves and street thugs as the other.

So I think it’s possible the quality of legal help available to Holmes (or Epstein, etc.) might be unavailable to street thugs at any price.

The TV show Better Call Saul is relevant. Saul is a lawyer who has an opportunity to work for a Mexican drug cartel. This is presented as having large potential downsides and being a major career choice that he might want to avoid.