We make decisions based on many factors. This article is about how to make good decisions. It uses arithmetic to help analyze decision making. For example, consider buying a car. You’ll consider price, brand, color, gas/hybrid/electric, crash test...

Big new article up! I think this one is important and would be good for people to study.

Since it has a bunch of sections, I added a new table of contents feature to the site for better navigation.

I am reading through it now. A quick thing I thought worth mentioning: 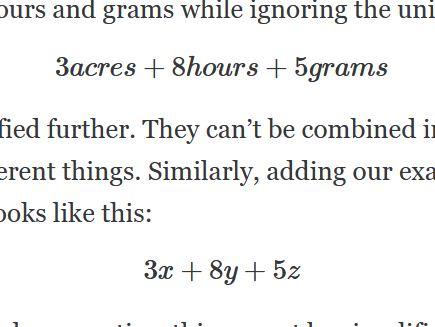 The first mathjax bit (3acres + 8hours + 5grams) is treating the units like a bunch of algebraic terms.

You can add spaces with "\ " (slash then space). I did it sometimes but didn’t want spaces in this case.

I’m not really sure the best way to handle math. mathjax is important for some stuff like fractions, exponents and roots, but it messes up copy/paste. i tried using it less but i found the regular font makes numbers too short compared to letters – in particular the 1 and 0 looked bad. possibly i could change the overall article font (dunno what it is – just the Casper default that some actual designer chose – and also with controlling fonts you have to worry about not all fonts being available on all platforms). I have a bunch of stuff in mathjax but not all cuz there are so many tiny mentions of numbers and variables inline.

I thought the italics acres thing looked ok enough but i don’t have a strong opinion on that or clear overall policy.

i expect to have little to no math in most articles so maybe this is good enough.

mathjax is important for some stuff like fractions, exponents and roots, but it messes up copy/paste

FYI for me: I can’t copy paste the mathjax from the cf site, but can here:

because they’re equal) in to get . In other words, given that one x

I agree that breaking copy-paste is a big downside (at least there is the right click menu; better than nothing).

This isn’t ideal, but if you want the math bits to be visually distinct (and can do css stuff + wrap equations in span/em) - you could just use the latex/mathjax font (new computer modern - free/libre) for those bits. That might fix some of the copy-paste issues. I can’t see fractions being copy-pastable except via (numer)/(denom) type thing.

I have occasionally looked into ways to copy-paste something different to what the user sees (e.g., including markdown markup, copying \TeX instead of the sometimes weird rendered bits). So far the only option seems to be doing some fiddly JS stuff.

FWIW I’ve found adding fonts via CSS to be v reliable (like, it’s safe to style a website with custom fonts if they’re linked and going to stay available).

I can’t copy paste the mathjax from the cf site, but can here:

Browser dependent I guess. I can’t c/p your example here well. I get:

Re converting chess dimensions: from what I gather, chess-playing programs might convert to a score while searching in the middle of the game, but they check decisive factors, too. Sort of like a checkmate is worth +\infty (or -\infty) so it always dominates (mb they emulate this by scoring it as \frac{10000000}{\text{MovesAway}} so that checkmating sooner is preferred). Mb worth mentioning? I ctrl+f’d for ‘chess’ and it didn’t seem like it appears in the CF’s Solution section.

What do people do about that? They multiply by weighting factors that get results they think are reasonable. But that isn’t actually a way of making decisions. They’re using their intuition, common sense or something else. That is how the decision is actually being made and that pre-existing conclusion is biasing their decision making process.

I’m not sure about “But that isn’t actually a way of making decisions.”

I think that the big quote is making these points:
(note: these are not in the same order as the quote, also the list isn’t meant to be exclusive)

“But that isn’t actually a way of making decisions.” is literally saying that the subject (that: the explicit method) isn’t a decision making method. But I think it’s intention is to say: the explicit method isn’t what is actually done by ppl most of the time. I’m not sure tho – like I think that explicit-weighting-factors is a method (well, once you add a way to like rank or pick a winner). Isn’t Analytic hierarchy process an example of that?

I think grammar and text analysis trees would locally help you here, however I doubt this passage is a constraint. You didn’t say goals or relate these comments to goals though so it’s hard to know. But I’m guessing you should focus on trying to understand the major themes of the post.

Yeah, I don’t think it’s a constraint either.

The goal was to figure out if I was reading “But that isn’t actually a way of making decisions.” correctly[1]. I’ll do a tree and mb post to grammar questions.

Yeah, I don’t think it’s a constraint either.

I’ll do a tree

I’m not sure that i know how to pick precise-enough goals.

The goal was to figure out if I was reading “But that isn’t actually a way of making decisions.” correctly

That wasn’t the goal I would have guessed from your post at all.

I’m not sure about “But that isn’t actually a way of making decisions.”

This is also written like a correction. You aren’t asking for help or saying you are having trouble understanding something. You seem to be trying to correct Elliot and tell him that he didn’t make his point properly, he used the wrong words for what he meant.

Yeah, you’re right. There’s something going on there but I have some pre-existing commitments now. I will come back to this.

Summary: Averaging doesn’t help because we can’t simplify and combine the terms, so it has the same issues as addition.

With median, you’d get the value for a single dimension. “And you’d need to be able to rank all the factors from different dimensions, in a single ranking, in order to find the median.”

(My thought) I’m not sure I quite follow this point. It’s unclear if Elliot is saying you just need to be able to say e.g. z > x > y or if he’s saying you need to be able to put the whole term (e.g. 5z) in a single ranking in order to find the median. I would think it is the latter, since even if you know 1z is greater than 1y, that doesn’t tell you if 5z is greater than 8y. You’d need more data about the relationship there to rank them for certain.

Elliot says (in a statement that covers both median and mode) “[b]oth of those would get a result in a single dimension rather than combining factors from different dimensions.” I guess you could just look at the coefficients to figure out the most frequent value. But then sometimes there might be no mode (if all numbers are different). And if you had say 2x, 2y, 3z, how does saying the mode is 2 help? And in that case it’s actually referring to two dimensions and you’re dropping the z…anyways I found this part a bit confusing.

You don’t look at just coefficients for mode. Mode means:

Statistics the value that occurs most frequently in a given set of data.

The mode is 2x because it’s the one thing that there are 2 of.

ah okay that makes sense, thanks.

I liked this point/example and thought it was especially clear (emphasis added):

In other words, suppose you come up with these two conversions (f is friendliness, c is cuteness, and g is goodness):

If you can’t accurately compare friendliness and cuteness directly, you also can’t convert them both to the same type of goodness.

In the section “Converting Dimensions to Goodness”, Elliot talks about how you can rank some stuff - like the cuteness of a pet. And then you can come up with approximate scores that reflect both the rankings and also the distance between the rankings. This is fine if you keep in mind that it’s an approximation. Quote:

We can’t measure cuteness of a pet either, but we can rank it. Which pet do we think is the cutest, second cutest, etc., in our opinion? And we can assign the pets numerics cuteness scores which are compatible with the rankings (highest ranked pet has the highest score, second highest ranked pet has the second highest score, etc.). We can also make cuteness scores approximate our opinion of how different the pets are. E.g. if the best two pets are similarly cute, and the third pet is much less cute, we might score them 85, 80 and 40. Those scores fine as long as we know they aren’t real measurements like inches. The cuteness scores just mean two things: the rank ordering we assigned the pets and a rough approximation of how close or far apart the pets are on cuteness.

I’m not really sure the best way to handle math. mathjax is important for some stuff like fractions, exponents and roots, but it messes up copy/paste.

Yeah. One workaround I use for copy/pasting mixed text/math is this (basically TextSniper with math support): 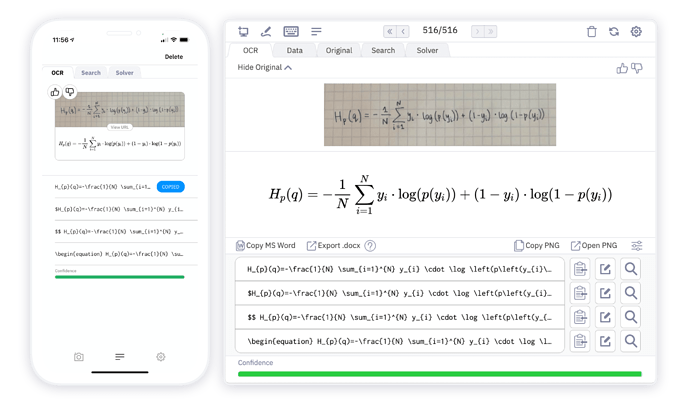 It has a limited number of free uses per month tho, and is like, an extra tool to worry about that you need to install instead of just being able to copy/paste normally