Here’s one from Atlas Shrugged:

It seemed to her that the spirals of flame-tinged fog were drawing time into an odd circle—and while a dim thought went floating through her mind like the streamer of an unfollowed sentence: To hold an unchanging youth is to reach, at the end, the vision with which one started—she heard the voice of a tramp in a diner, saying, “John Galt found the fountain of youth which he wanted to bring down to men. Only he never came back . . . because he found that it couldn’t be brought down.”

Here’s a tree I made of it a while ago. Let’s see how the old forum handles this bad boy. 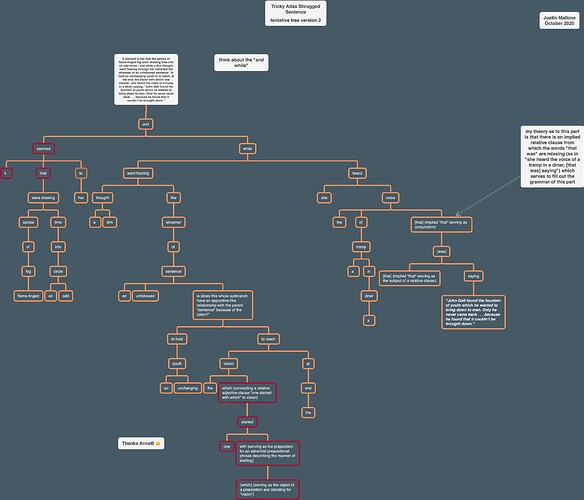 analyzing (via tree) a philosophy quote is definitely on topic for Unbounded or Friendly!

A building has integrity just like a man. And just as seldom.

This is a really interesting short one IMHO. I might try doing a detailed analysis later (or someone else can!)

A building has integrity just like a man. And just as seldom.

This is a really interesting short one IMHO. I might try doing a detailed analysis later (or someone else can!)

I was thinking of alternate ways of writing the same idea.

Very clear but wordy and not literary at all.

A somewhat more compressed and grammatically standard version might be:

A building has integrity just like, and as seldom as, a man does.

Rand’s use of a fragment really lets her cut things down, and I also think there’s some emotional weight and emphasis that comes from the delay and the fragment that’s hard to put into words.

“Why are you a good architect? Because you have certain standards of what is good, and they’re your own, and you stand by them. I want a good hotel, and I have certain standards of what is good, and they’re my own, and you’re the one who can give me what I want. And when I fight for you, I’m doing—on my side of it—just what you’re doing when you design a building. Do you think integrity is the monopoly of the artist? And what, incidentally, do you think integrity is? The ability not to pick a watch out of your neighbor’s pocket? No, it’s not as easy as that. If that were all, I’d say ninety-five percent of humanity were honest, upright men. Only, as you can see, they aren’t. Integrity is the ability to stand by an idea. That presupposes the ability to think. Thinking is something one doesn’t borrow or pawn. And yet, if I were asked to choose a symbol for humanity as we know it, I wouldn’t choose a cross nor an eagle nor a lion and unicorn. I’d choose three gilded balls.”

Similar to the one I used at the top of

The worst thing about dishonest people is what they think of as honesty,” [Gail Wynand] said. “I know a woman who’s never held to one conviction for three days running, but when I told her she had no integrity, she got very tight-lipped and said her idea of integrity wasn’t mine; it seems she’d never stolen any money.

He tried to explain and to convince. He knew, while he spoke, that it was useless, because his words sounded as if they were hitting a vacuum. There was no such person as Mrs. Wayne Wilmot; there was only a shell containing the opinions of her friends, the picture post cards she had seen, the novels of country squires she had read; it was this that he had to address, this immateriality which could not hear him or answer, deaf and impersonal like a wad of cotton.

The Return of the Primitive, The “Inexplicable Personal Alchemy” :

Who can take any values seriously if he is offered, for moral inspiration, a choice between two images of youth: an unshaved, barefooted Harvard graduate, throwing bottles and bombs at policemen—or a prim, sun-helmeted, frustrated little autocrat of the Peace Corps, spoon-feeding babies in a jungle clinic?

No, these are not representative of America’s youth—they are, in fact, a very small minority with a very loud group of unpaid p.r. [agents] on university faculties and among the press—but where are its representatives? Where are America’s young fighters for ideas, the rebels against conformity to the gutter—the young men of “inexplicable personal alchemy,” the independent minds dedicated to the supremacy of truth?

With very rare exceptions, they are perishing in silence, unknown and unnoticed. Consciously or subconsciously, philosophically and psychologically, it is against them that the cult of irrationality—i.e., our entire academic and cultural Establishment—is directed.

They perish gradually, giving up, extinguishing their minds before they have a chance to grasp the nature of the evil they are facing. In lonely agony, they go from confident eagerness to bewilderment to indignation to resignation—to obscurity. And while their elders putter about, conserving redwood forests and building sanctuaries for mallard ducks, nobody notices those youths as they drop out of sight one by one, like sparks vanishing in limitless black space; nobody builds sanctuaries for the best of the human species.

So will the young Russian rebels perish spiritually—if they survive their jail terms physically. How long can a man preserve his sacred fire if he knows that jail is the reward for loyalty to reason? No longer than he can preserve it if he is taught that that loyalty is irrelevant—as he is taught both in the East and in the West. There are exceptions who will hold out, no matter what the circumstances. But these are exceptions that mankind has no right to expect.

From Atlas Shrugged. Bold added by me:

He lay still, alone in the silence of his office. He knew that the meaning of his mills had ceased to exist, and the fullness of the knowledge left no room for the pain of regretting an illusion. He had seen, in a final image, the soul and essence of his enemies: the mindless face of the thug with the club. It was not the face itself that made him draw back in horror, but the professors, the philosophers, the moralists, the mystics who had released that face upon the world.

He felt a peculiar cleanliness. It was made of pride and of love for this earth, this earth which was his, not theirs. It was the feeling which had moved him through his life, the feeling which some among men know in their youth, then betray, but which he had never betrayed and had carried within him as a battered, attacked, unidentified, but living motor—the feeling which he could now experience in its full, uncontested purity: the sense of his own superlative value and the superlative value of his life. It was the final certainty that his life was his, to be lived with no bondage to evil, and that that bondage had never been necessary. It was the radiant serenity of knowing that he was free of fear, of pain, of guilt.

“peculiar cleanliness” is an expression that’s always stayed with me for some reason.