One of the things perpetuating the harassment campaign is that lots of CritRats keep reading my stuff. That keeps them thinking and caring about me. It keeps their internal conflicts related to me active in their minds. It also leads sometimes to talking about me, linking me and being asked about me, etc., which leads to expressing hateful opinions about me to other people (both to people who didn’t already have an opinion about me, and also to other haters to reinforce their hatred). It also leads to plagiarism since they don’t want to give me credit, status, etc. (and they fear being attacked by other people in their community if they do).

It’s really weird/unusual to hate someone, and either ghost them entirely or refuse to talk about any conflict resolution, but also to keep reading their stuff. It’s problematic. They have this ongoing mix of love and hate towards me, and ongoing internal conflict about it, which is why they won’t leave me alone. That’s a major characteristic of Andy B and comes up with lots of them.

They are partly mad at me because they like me and want to have discussions with me and want to have people in their community who write things like I write … but they find something is blocking that. And they’d rather blame me than blame themselves for why that isn’t working and they aren’t on my forum. They don’t want to blame it on their incompetence, dishonesty, social climbing, arrogance, or anything like that. Some of them hate me for implying – or sometimes outright saying – that they could and should be better.

They also – related to reading my stuff and thinking it’s great – see me as important, high status, and a significant part of the world, which is related to why some of them they are so scared of my criticism and avoid saying stuff in public. In a way, the more they like me, the more my criticism means to them, so the more they dislike me.

Tip: If you must have someone to blame other than yourself, try blaming DD, whose leadership led to this toxic situation. Regardless, stop blaming your internal conflicts on me. Even when you see me as the leading representative of reason, so your internal conflicts related to reason seem to you like they are about me … and even when some of my writing brings up some conflicts you have or even teaches you a new idea that is in conflict with some of your other ideas … it’s not really about me, so leave me alone.

An anecdote from just now:

I wanted to look for the quote behind the ‘let our ideas die in our place’ idea. I started less specific than searching for a quote but hit on some quotations – all the early results had no source or some connection to / mention of DD.

That said, I was surprised to see that searching for popper "let our ideas die in our place." on both DDG and google links to https://curi.us/2462-misquotes-by-david-deutsch. It’s a bit surprising b/c of google’s past deranking of curi.us, so seems worth mentioning.

I also wanted to mention b/c it helped me – @Elliot’s post is basically the best thing to find WRT searching for a quote. 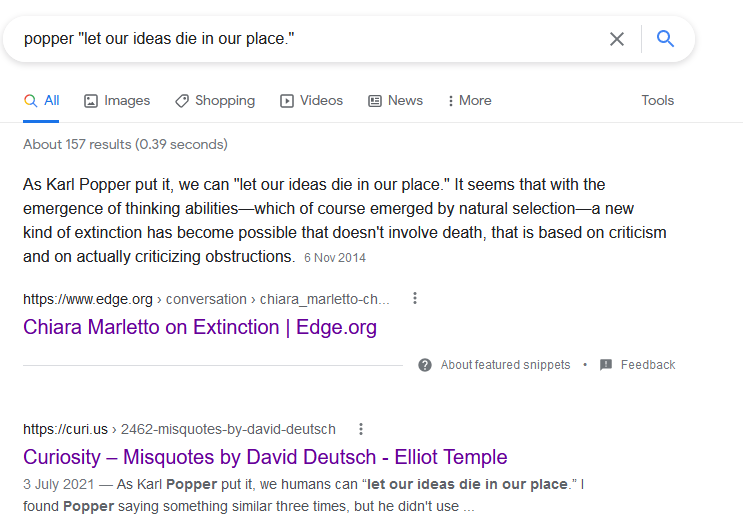 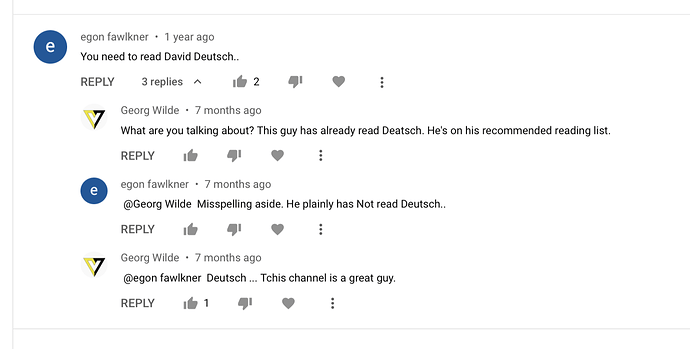 Just saw this claim that I haven’t read DD. I laughed.

There’s also a way to view it where it says something sad about the world and what too many people are like. He’s badly wrong and reiterated his error. People often make assumptions this wrong and biased and don’t state them out loud but do act on them. 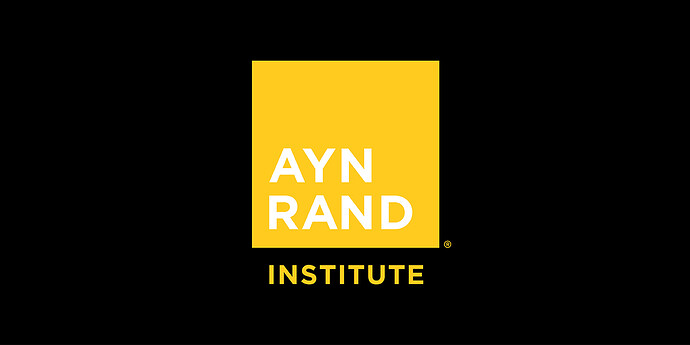 Of Schisms, Public and Private

Why does the Objectivist movement experience conflicts and schisms? Why do some Objectivists and Objectivist organizations refuse to work with one another? Why is there infighting? Why can’t we all just get along?

ARI is not the leader of an organized Objectivist movement

ARI claiming not to be the leaders of a group reminded me of DD claiming the same. ARI claiming it is even more absurd.

Found via Schismatology - by Robert Tracinski - The Tracinski Letter

LOL. Perhaps I should have been more specific. Can you point me to the specific stuff ET has written about on how to make ideas intuitive? What does it take to make ideas I can explicitly reason and come to conclusions intuitive? What sort of mastery does it require? I’m basically asking you for a curriculum whose end goal is me achieving mastery of a kind such that when I explicit reason about something it also changes my intuitions. I’m not able to design that curriculum for myself.

Mastery is when you’re very good at something. You know all about it. That generally means you can do it quickly, easily, with low attention and with few errors. Time, effort, and attention are resources. Masters do things more efficiently and make...

Curiosity – Harassment Campaign Update for May 2022

I’m going to share four incidents that occurred after my last update on David Deutsch’s harassment campaign. This is with my blog comments disabled and my forum paywalled; otherwise it’d be much

It sucks that they still won’t either leave you alone or try to resolve things.

I guess if they thought you were just bad they’d stay away and tell other people to stay away. Instead they’re treating you like a rival who they need to make lose in order for them to win.

But, somehow, “Taking Children Seriously” founder, David Deutsch, disagrees with Paris Hilton and politically tweeted against her campaign to help stop this form of child abuse. DD’s take is that troubled teen camps (often away from home, sometimes in the wilderness) are just school and no worse than any other school, so while school is bad in general, Hilton is wrong to speak out about this – the camps apparently shouldn’t be targeted for complaints and reforms. 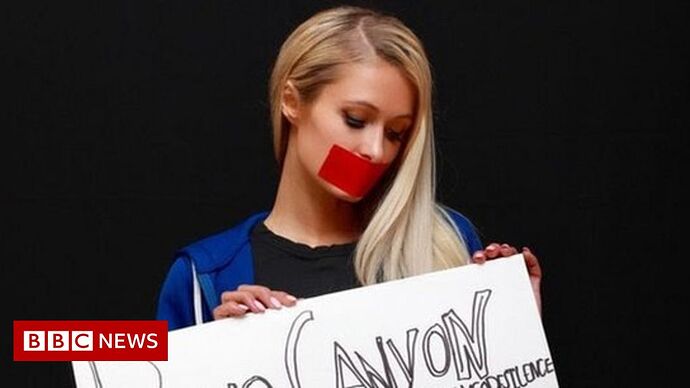 Paris Hilton is among thousands who allege abuse at programmes aimed at reforming US teenagers.

All compulsory education, “tough” or not, “love” or not, in camps or not, and whether it “traumatises” or not, is a violation of human rights.

Listen to Hilton’s speech in the TikTok at the start of this post and compare that to your experience at school. It sure wasn’t like my school experience, nor the experience of anyone else I knew at my school or some other schools in the area. Why would DD try to say they are the same, and defend an evil that is abusing children, when they’re so different and also he’s allegedly especially pro-child?

DD is so concerned with his reputation and hides a lot of his opinions but then chooses to share this? I don’t get it. I imagine this take would horrify most TCSers in addition to horrifying most decent people and also being wrong

In the late 1990’s, TCS was known for brigading parenting forums with unwelcome, hostile messages (e.g. saying that every parent who disagrees with TCS is a child abuser). Some forums banned all TCSers as a group because it was a brigading problem rather than an individual posters problem. I don’t think that kind of online brigading became a common, well known problem until a decade or more later. The brigading died down when SFC and DD became less actively involved in TCS.

ET joined in the early 2000’s and got banned from some forums but never for brigading – he just individually argued with and annoyed people (and he focused primarily on making arguments and explaining ideas, as is his style but not SFC’s style).

SFC’s and DD’s history of brigading – getting their followers as a group to go be aggressive to people who want to be left alone – is relevant to the current harassment problem coming from their community.

The sort of people they find, meet, hang out with and recruit is also relevant. When you’re attracting e.g. NAMBLA people to your forum, it’s easier to get your community to brigade and harass than it would be if you were attracting math club people.

The Secret Beliefs of the Transgender Movement

I don’t recommend the article but I thought this part was a good description:

So, what did radical feminism mean to me? I hadn’t actually read any works by radical feminist thinkers, only excerpts from writings by feminists like Andrea Dworkin, Judith Butler, and Julie Bindel, which were posted without context on Tumblr by other trans-inclusive radical feminists. Some of those feminists were trans themselves; some were not. They were the thought leaders. They constructed an ideology collaboratively, using social media as their medium. Not all of them agreed with each other, but a spiderweb of mutual follows connected them, and what one wrote on any one day would influence what a dozen others wrote the next day. When I was fifteen years old, I adopted a kaleidoscopic, schizophrenic ideology patched together from hundreds of individual posts talking about feminism, disability, gender identity, queerness, race, capitalism, and leftism. I didn’t have the context for any of it, and neither did any of the other teenage kids on Tumblr at the time–of which there were many.

The CritRat Twitter community has similarities to this Tumblr community. It has multiple leaders but no specific leader taking responsibility for stuff. It influences people a lot but it’s also pretty amorphous.

Another parallel is that most CritRats haven’t read many whole philosophy books. I think a lot of them haven’t even finished BoI. Some managed to read BoI but not FoR or any Popper books. They rely more on shared quotes, podcasts, tweet threads, etc.