I was surprised at the low quality of Pinker’s writing. I was also surprised at how much I missed in reading the sentence myself because I was going off an extremely vague impression of the meaning of the sentence. I didn’t go in thinking that the writing would be super awesome but it’s so bad that I’m not even sure he wrote what he meant to write in the first sentence. I don’t know what he might have wanted to say but claiming that AI has already been created and making the sentence about atheism seems so off that I wonder if he didn’t really understand what he was saying. I think Pinker wanted to talk about the universality of computation and it’s implications about developing AI.

The analysis also highlighted an error that I make when I read sentences. I try to reinterpret sentences as having a goal that sounds plausible to me rather than reading literally. I think I do this more with reading that I find more difficult. When I read Pinker’s first sentence I think I took away that he might have wanted to say something like: The universality of computation implies that AI can be created out of material stuff and the argument that AI is possible in principle is one of the great ideas of human history.

EDIT: At this part; Philosophical analysis of Steven Pinker passage | Everything explained from grammar to arguments - YouTube

I found the explanation of the circular argument in the sentence really cool and helpful. It is a great example of the kind of thing I want to learn how to do when I start learning logic. Not only did I not notice the error but it’s not something I thought to look for at all.

I try to reinterpret sentences as having a goal that sounds plausible to me rather than reading literally.

It’s good to be able to read sentences multiple ways, and to sometimes actually read them multiple ways, write down multiple interpretations, and compare and analyze them (both analyzing whether each version is a good idea and also analyzing what the author actually meant). Doing multiple readings plus analysis is good practice or good when figuring something out is really important to you so you want to put in more effort.

PS Your links in both posts have the same timestamp. Seems unintended? Also if you don’t want to type in a little quote or context from the video to make the forum post easier to read, you can also quote from YT autogenerated subtitles via the three dots menu: 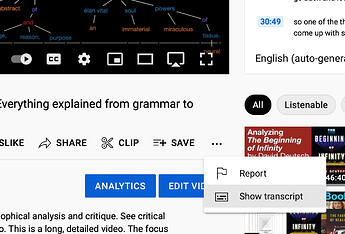 Then you can just paste some in. Example:

And then people reading the post have more chance to figure out what’s going on without having to watch video clips (without an endpoint marked).

I think Pinker talking about tweaking AIs for safety and efficacy is related to viewing intelligence on a continuum where different ethical standards apply along the spectrum. I guess that the main error is not recognizing the discontinuity between people and non-people. There’s also some general pro-violence, in the name of safety and efficacy, ideas mixed in. I also guess that thinking about intelligence as a spectrum would seem to make it harder to have a principled view of rights.

The second timestamp was incorrect. I edited the timestamp to the 54:08 mark.

Some important points/takeaways from the video: